„Money, it’s a crime
Share it fairly
But don’t take a slice of my pie”

When you come to Hungary, you should not forget that although the country is a member of the European Union since 2004, forint (abbreviation: Ft; international code: HUF) is our currency. As part of Hungary’s integration into the EU, the forint may be replaced by Euro, depending on the economic situation…in the future.

The word ’forint’ comes from the name of the city of Florence, Italy, where golden coins were minted from the 13th century called fiorino d’oro. In Hungary, florentinus also a gold-based currency, was used from 1325 under King Charles Robert and forint was the name used in Hungarian for the currency of the Austro-Hungarian Monarchy between 1868 and 1892. The forint was re-introduced in 1946 after theWWII, and the currency remained relatively stable until the 1980s. After the reconciliation in 1989-90, an annual inflation rate of up to 35% was to be observed for three years, but significant market economy reforms helped in stabilisation. 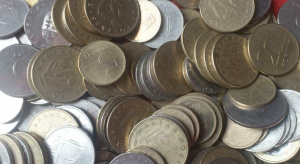 The sum of total purchases are rounded to the nearest 5 forint (to 0 or to 5) when paid with cash! It means, that if you buy let’s say goods for 1553 Ft, and you chose to pay by cash, you will have to pay 1555 Ft. The same way, if this sum is 1552 Ft, you are supposed to pay 1550 Ft. This rule is not applicable when you pay by credit card – what you can do in almost every store and taxi. There are plenty of ATMs all around the city. I’m just saying, because this is one of the first question of visitors to Hungary.

I will give you the middle values as it appears at my bank’s website (there are values for selling, buying and one for a middle value), so you can prepare how to calculate those numbers seen on price tags. These values are valid on 25th July, 2012. 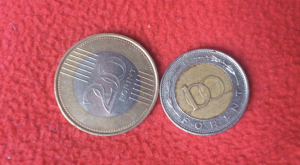 …just to give you a few examples. And this means, that our largest value note, 20 000 Ft is equal to just 69.4 €! One Euro is worth approximately 300 HUF, as seen on the photo above. 🙂 A great currency exchange site is available at www.xe.com.

Hungary’s total land area is 93,030 km2 along with 690 km2 of water surface area which altogether makes up 1% of Europe’s area.

Nearly 75% of Hungary’s landscape consists of flat plains. Additional 20% of the country’s area consists of foothills whose altitude is 400 m at the most; higher hills and water surface makes up the remaining 5%

Hungary has some limited natural resources including bauxite, natural gas and coal, fertile soils and arable land. Our wines are enjoyed throughout Europe and elsewhere. Another traditional world-famous alcoholic drink is the fruit brandy pálinka. Hungary‘s main manufactured exports include electric and electronic equipment, machinery, cars (Mercedes, Audi…Suzuki ) chemicals and certain foodstuff (beef, rabbit, goose liver, crops). In European terms, Hungary’s underground water reserve is one of the largest. Hence the country is rich in brooks and hot springs as well as medicinal springs and spas; as of 2003, there are 1250 springs that provide water warmer than 30 degrees.As for other values, Hungary is a highly musical country: our traditional folk music inspired such great national composers as Liszt, Bartók and Kodály. Folk art is quite rich too: pottery, embroidery, fine porcelain making and painting, etc mark our culture.

Declining exports, reduced domestic consumption and fixed asset accumulation hit Hungary hard during the financial crisis in 2008, making the country enter a severe recession of – 6.4%. The economy showed signs of recovery in 2011 with decreasing tax rates and a moderate 1.7 percent GDP growth.

This entry was posted on August 7, 2012 by esoponcologypharmacist.